Terry Todd, Ph.D. said today that he would like to have ten competitors at the 2005 Arnold Strongman contest, and that so far, seven men have been invited. 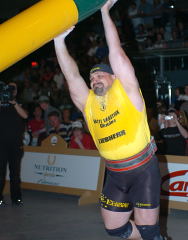 Dr. Todd explained that this year's winner, Zydrunas Savickas, and runner-up, Svend Karlsen, are automatically invited back, and that traditionally, the Arnold Strongman also invites the World's Strongest Man winner, the IPF superheavyweight champion, and the US national strongman champion, so Vasyl Virastiuk, Brian Siders and Van Hatfield, respectively, have been invited to the 2005 Arnold Strongman contest. In addition, Dr. Todd said, Magnus Samuelsson and Hugo Girard have been invited, given their proven abilities and top rankings in the strongman world.

The Arnold Strongman contest quickly established itself as a tremendous event, and we expect the 2005 edition to be the best yet. For contest details, ticket information and everything else you need to know about the 2005 Arnold Expo, be sure to check their official website.