Bill “Full Sterkur” Crawford headed to Iceland for just the kind of fun and challenge you’d expect from the man also known as Doc Rock, and he’s filed a report on the Highland Games organized by Petur Gudmundsson and his wife. 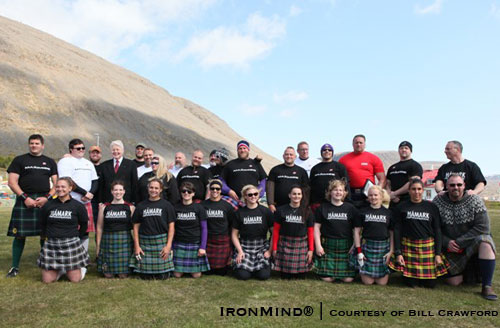 Group shot from the 1st Annual Iceland Highland Games.  Incidentally, for anyone who was worried about libations, Bill put our minds to rest: “We did have Brennivin to spare as they were an official sponsor!”  IronMind® | Courtesy of Bill Crawford.

Petur Gudmundsson and his wife totally exceeded all expectations for the 1st Annual Iceland Highland Games this past weekend in Patreksfjordur in the Western Fjords.  With 11 Women, 8 Open athletes and 6 Masters throwers, along with judges, family and friends, their efforts to bring everyone 6 hours north from Reykjavik, were nothing short of logistical magic.

Viking culture meeting Celtic culture will always be a big draw, but also the town of Patreksfjordur was celebrating a national holiday in honor of Icelandic mariners. President Olafur Ragnar Grimsson also came and greeted the athletes.

Sam Grammar showed his honorary Viking status to cash in on an impressive win in the Open Men's Class. Matt Vincent was strong in 2nd place and 3rd place belonged to Spencer Tyler.

Adriane Blewitt was in her usual dominant form to win the Women's class.  Kate Mason showed terrific early season strength to take second and Emily Burchett was strong in 3rd place.
Gene Flynn owned the Master's Mens Class with a very strong win, showing great promise for this season.  Mike Dickens was right on Gene's heels with impressive throws, and old hand Bill Crawford pulled up in third.
Amongst the exotic food that included whale steaks cooked on the beach, stonelifting sites were visited.  The Petursstein at the impressive Fjallfoss water falls, the Judas Stone as well as the massive 620 lb Brynjolfstak saw airtime as well.  What would you expect when that many strength athletes are in Iceland.  By the way fellas, Kate Mason lifted the smooth 130-kg Judas Stone...think about that!

The IHGF is very proud to have another Highland Games to add to its associated events.  The powerhouse Icelanders not only show strength physically but that they are also great hosts with a knack for organization.  In a setting that was breathtaking to say the least, all the magic of midnight sun and brisk Icelandic air made this competition worthy of a putting a gleam in Thor's eye!