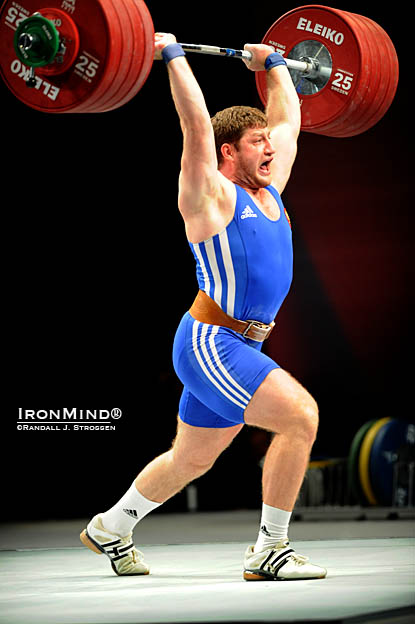 Tell it goodbye: Khadzhimurat Akkaev makes this 232-kg clean and jerk to leapfrog to the gold medal in the jerk and total on the final attempt of the 105-kg category at the World Weightlifting Championships.  IronMind® | Randall J. Strossen photo.


It’s been a sea of red lights so far at the World Weightlifting Championships, but the tide turned tonight as three lifters in the 105-kg A session went six-for-six, including the teammates Khadzhimurat and Dmitry Klokov, who swept the gold and silver medals respectively.

Gia Machavariani (Georgia) was the other lifter in this elite group, and his consistency was rewarded with the bronze medal in the snatch for his 187-kg lift.  Klokov ended with 196 kg and Akkaev finished with 198 kg.

Oleksiy Torokhtiy (Ukraine) made 229 kg on his third attempt clean and jerk, for the bronze medal in both the jerk and the total, while the two Russians sharpened their knives for their duel: Klokov had opened with a conservative 220 kg and Akkaev answered with 222.  Klokov followed with 225 and Akkaev replied with 228, and then both men were down to their final attempts.

Akkaev called for 235 kg to wait out Klokov, who made a strong lift with 232 kg, which he celebrated in a very restrained style by his standards.  Akkaev changed his call, moving down to 232 kg, going for the win while showing he could match Klokov in the clean and jerk, but without taking an unnecessary risk.  Typical of his business-like style on the platform, Akkaev came out, shooed away the loaders, who were cleaning the bar, and attacked the weight in a lift that was never in doubt.

Hang on for London—this class is going to be fireworks.